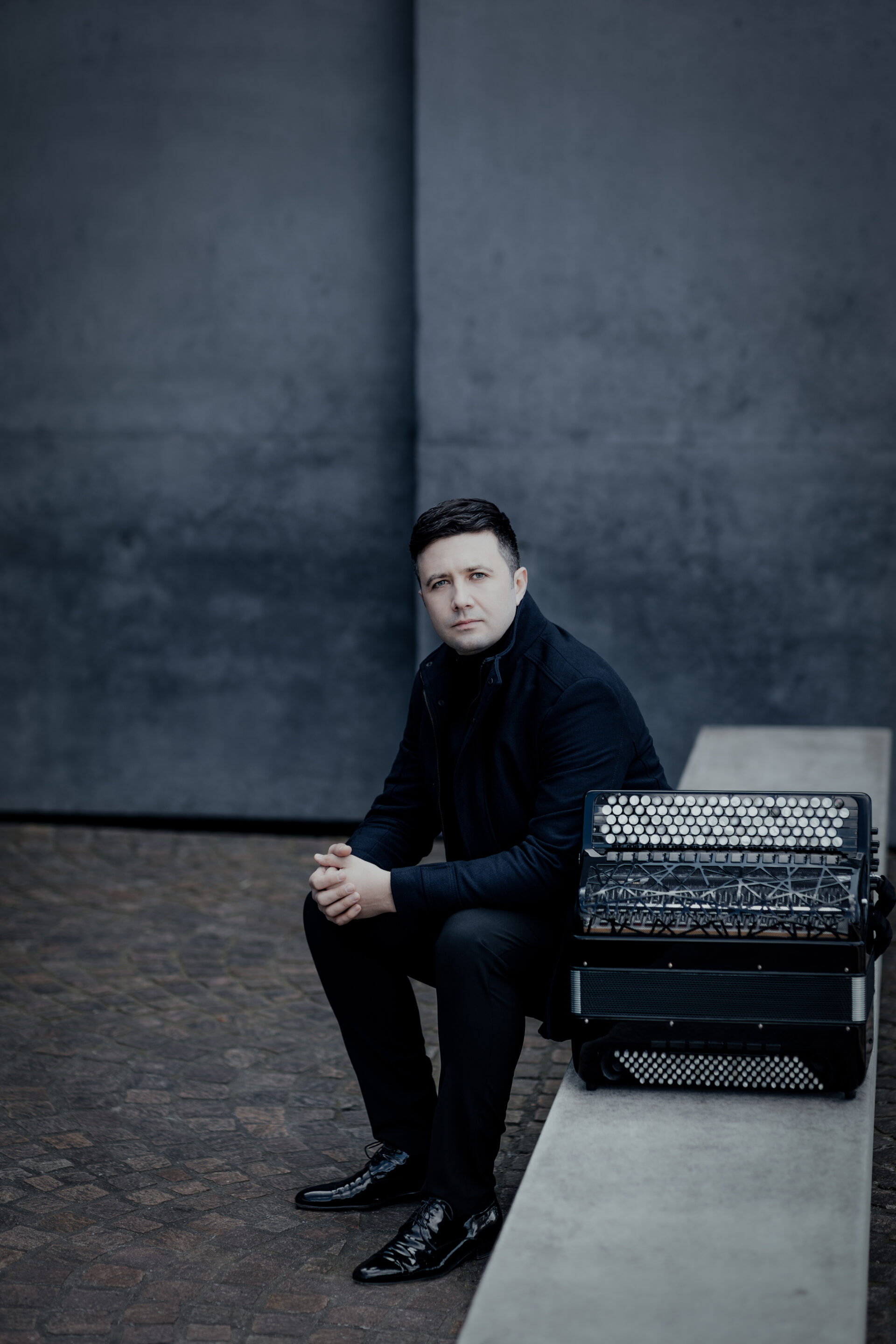 Praised by the press as a “true magician” and “ambassador for the versatility of his instrument”, Goran Stevanovich is considered an important accordionist of the present day. His versatile musical skills make him a sought-after chamber music partner of artistic personalities such as the oboist Albrecht Mayer, by whom he was introduced in 2020 and together played a duo concert as part of the Musikwoche Hitzacker Festival.

Born and raised in Bosnia-Herzegovina, he picked up the accordion for the first time as a child – the instrument being firmly anchored in the folk music of his home country. For his studies, he moved to Hannover, where he completed his concert exam in class of prof. Elsbeth Moser in 2018 as part of the “Meisterstück” series at HMTM and is now a lecturer at this institution.Goran Stevanovich is a multiple prize winner of national and international competitions (China, USA, Spain), including the German Accordion Music Prize 2012.

His extraordinarily broad repertoire, ranging from early music, Schubert, Bruckner, Mahler and Hindemith to contemporary composers, has allowed him to develop his own unique sound aesthetic and style. He has already thrilled audiences several times in world premieres, including compositions by George Lewis, Feliz Anne Reyes Macahis, Randall Meyers, Aleksandra Vrebalov and Markus Stockhausen. In 2020 he premiered Clemens Gadenstätter’s impressive work “Die Zelle” together with Klangforum Heidelberg, and in 2019 and 2021 he was involved in the multi-part world premiere of José María Sánchez-Verdú’s “Commedia”. The third part of this work, based on texts by Dante Alighieri, will have its world premiere in the coming season – combined with a CD production. Other highlights included the multimedia project “Circling Realities” with the Orchester im Treppenhaus, from which a completely new concert format developed in times of Corona, as well as the “melaTONin” with trio.s co-developed by Stevanovich – a concert in which a sleep cycle is made musically experienceable in its phases.

He has performed at major festivals such as the Bruckner Festival Linz, Young Euro Classics Berlin and the SWR Festival, and in 2019 he received acclaim in Liverpool as part of the UNESCO Solist Exchange Program. His most important collaborations include regular projects with the Ensemble Mini Berlin and Orchester im Treppenhaus in Hannover. He also forms duos with Hamburg-based double bassist Felix von Werder, overtone singer and vocalist Natascha Nike and is also an integral part of the European concert scene with his trio.s, founded in 2015, and his Tango Ensemble Camorra. In addition to his chamber music projects, engagements took him to renowned orchestras such as the NDR Radiophilharmonie, the Göttingen Symphony Orchestra and the St George Hall Residence Orchestra in Liverpool.
Highlights of the coming season include performances at the Elbphilharmonie, the Rheingau Music Festival and the Mozartfest Würzburg, along with participation in the Alfred Töpfer Foundation’s CONCERTO21 Academy for Soloists.