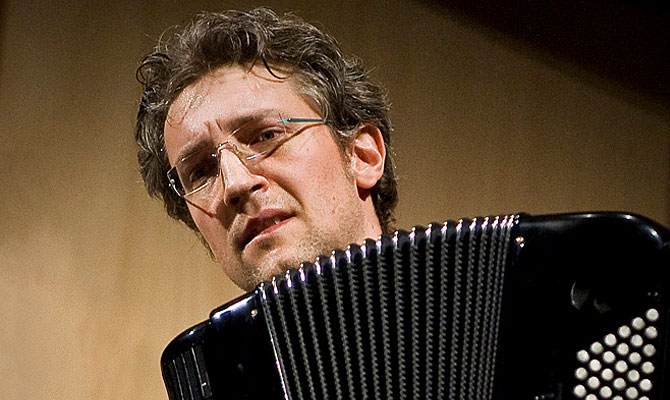 Corrado Rojac began studying accordion in his home town under Eliana Zajec. In 1994 he graduated from the Cherubini Conservatory in Florence where he was the first Italian to graduate in accordion from the Conservatorio di Stato. Rojac was one of the first professors of accordion at any of the Italian state institutions, first at the Conservatori Pergolesi in Fermo and Campiani in Mantova and then later at the Tartini in Trieste. One of the most popular Italian accordionists performing today, Rojac plays widely from both the solo and chamber repertoire for the instrument. Rojac has played in renowned music halls such as Teatro Regio in Tourin, La Fenice in Venice, the Academic Institution Concert in Rome, the Philharmonic Academy in Bologna, and the MITO Festival in Milan. Recent performances at Aspekte Salzburg, the Biennale in Zagabria, the New Music Week Bucarest, and the Second Exhibition of Contemporary Italian Music at the Conservatory in Beijing. Rojac has recorded for radio and television, with engagements at Austrian ORF, RAI, SKYclassica and Limen TV. In 1992 Rojac played in duet with the Italian pianist Bruno Canino at the Cividale Mittelfest and he has played with the Milan Divertimento Ensemble under the guidance of Sandro Gorli since 1997. Rojac has collaborated with the Risognanze ensemble in Milan and with FontanaMixEnsemble in Bologna. In 2003 Rojac was accordionist in residence for the Laboratory of Contemporary of Azio Corghi at the Accademia Chigiana in Siena. Rojac is deeply committed to the development of the contemporary literature for the instrument and has worked widely with composers from around the world in the preparation of new scores, recordings and premieres. Rojac holds a degree in composition from the Conservatorio Verdi in Milan where he studied under Alessandro Solbiati. In 2010 and 2011 Corrado Rojac was involved in a project regarding the new contemporary literature for accordion promoted by the Harvard University in Boston. At the final concert, held at John Knowles Paine Concert Hall of the same university, Corrado Rojac premiered new accordion works dedicated to him by Trevor Bača, Gabriele Vanoni and Edgar Barroso. In 2001 Rojac recorded a CD for the Real Sound of Udine which was met with both critical and popular acclaim. In 2011 Rojac recorded a CD entitled “Variazioni” for Limen of Milano that was broadcasted several times on national radio stations and brought him the “Orpheus Award” in 2012.
SITO WEB