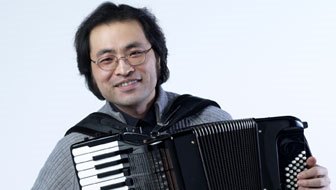 As first Chinese ever won gold medal/ first prize as an accordion virtuoso in a major international competition, Professor Cao was awarded by Beijing Municipal Education Commission for excellent teacher in high level education in 2017, sponsored by the Chinese Ministry of Education as a member of “New Century Excellent Talents in University” and also awarded the Bao Gang Educational Outstanding Teachers’ Award.

He started learning the accordion at very early age, in 1992 was sponsored by the German Academic Exchange Service (DAAD) to study abroad at the University of Music and Drama in Hanover, Germany.  In 2001, he was the first Chinese who has been awarded the “Master Soloist Diploma,” for his outstanding achievements in music recital.

In June 1997, Professor Cao won the first prize in “The 7th Accordion Grand Prix” with his superb artistry and outstanding performance in Baden-Baden, Germany. In October 1997 he won the first prize again in “The 22nd Citta’ Di Castelfidardo International Accordion Soloist Competition” in Italy.

Professor Cao taught in the University of Music and Drama in Hanover from 2000 to 2004 and in 2001 was appointed as visiting professor of the Tian Jin Conservatory of Music.

Professor Cao researched and achieve the world’s most advanced free-bass accordion music scoresaudio and video information about international accordion developments and brought them back to China. He has a profound impact on Instrument industry and the Chinese free bass classical accordion teaching.

In March 2004, he established undergraduate course for students majoring in accordion performance at the Central Conservatory of Music where his excellent teaching is well regarded and widely recognized.