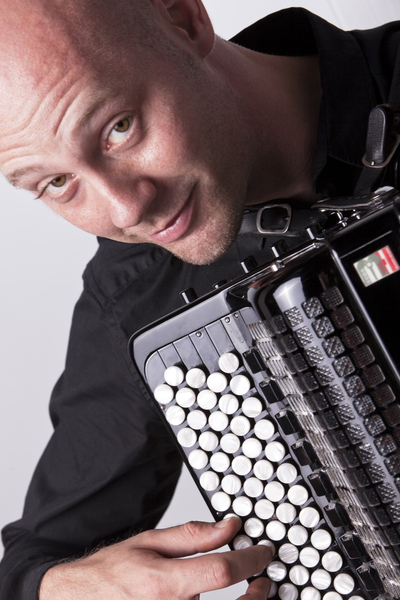 Harald Oeler began studying accordion at the age of six.
After finishing his studies of organ, also he received master classes in preparation conservatory studies:
After having successfully participated in the Jugend musiziert and Jugend komponiert, he followed the teachings of Professor Hugo Noth.
His studies then continued under the guidance of Professor Stefan Hussong at the Würzburg Musikhochschule in 2001, where, in addition to completing his course of studies, was also taken in several masterclasses.
During his studies, Harald Oeler has won awards from national and international competitions, among which is included third place at the Third International Accordion Competition Tokyo / Japan, the second place at the 2005 German Music Conservatory Competition, second place at the International Accordion Competition in Arrasate / Spain and in 2008 the first prize at the International Accordion Competition Klingenthal / Germany. During his career he has had the opportunity to work with some of the largest and most respected German artists like Sinn Yang, Anette von Hehn, Thomas Hoppe, Stefan Heinemeyer and Michael T. Otto.
Harald Oeler won a scholarship from the German National Merit Foundation and has received support from the Yehudi Menuhin Foundation Live Music Now.
Harald Oeler plays an intense concert activities both in Germany and abroad and has performed as a soloist in numerous ensembles. also he received the “Bavarian Cultur Prize 2008”.
the result of his brilliant career can also be heard on the radio in Germany, on television and in various production companies.
He will perform:
– September 02, at 20.00, to Oettingen at the “Internationales Violinfestival Oettingen” – Duo ViA! 8 Jahreszeiten
– November 11, at Hammelburg, DALV Kammermusikkurs Musikakademie Hammelburg
-12 novembere, Hammelburg, DALV Kammermusikkurs Musikakademie Hammelburg
-13 November, Hammelburg, DALV Kammermusikkurs Musikakademie Hammelburg
– November 17, at 19e30, Selb / Theater, Cembalokonzert.

Do not miss it!