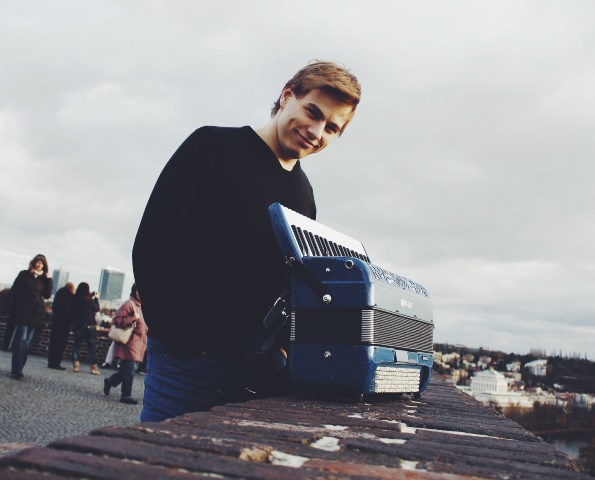 Samuel Raska is a Czech accordionist, composer and teacher.
He studied Percussion, Jazz Piano and Accordion in a conservatory of the Czech Republic. Currently only he plays the accordion, but is helped by knowledge of such a vast sector of the music world.
As a musician, Samuel is dedicated to the accordion in many styles. Sounds Jazz pieces with their own arrangements, disco music and pop music, both in the band’s formation and as a soloist, traditional and classical music, such as Bach Violin Concerto in A Minor.
During his concerts he has collaborated with many musicians, Jazz, Big Band, Rock bands, and lately with an orchestra as a solo singer and accordionist. He recorded three CDs with a string quartet and with pop and rock arrangements.
He composes music and lyrics for the band Sami. For other formations instead he writes arrangements, especially for accordion, and performed with his famous songs arrangements. You can find his music on his website. For the future, he would like to write a book about his music, accompanied by his songs for solo and accordion.
Prague teaches accordion in a private school. He is currently writing a book for accordion for educational purposes which focuses on improvisation, on the ear and on the performance of the composition fundamentals.
It has a special accordion Pigini, with smaller keys and microphones, of course blue! Here’s how it sounds with his Pigini accordion!