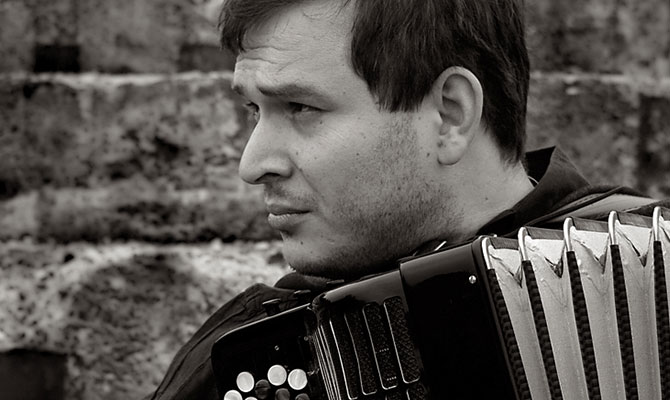 Peter Katina was born in Slovakia in 1975 and embraces the accordion at the age of six. Already in his studies at the Primary School of Arts he has entered and won numerous events and competitions. He concluded his studies of interpretation of contemporary music with glittered results under the guidance of Professor Owen Murray. He continued studying at the Academy of Performing Arts in Bratislava with Doc. Rajmund Kákoni. Right now Peter Katina proved prone to the interpretation of contemporary music, spreading various compositions for accordion both in Slovakia and abroad. Currently he performs premieres of works by composers Slovaks and Danes, and next to solo projects, he performs in a duo with his wife, pianist Janette Katinová © ingerová. His discography under the label Slovak Hevhetia includes her debut “Flashing” album with Scandinavian music, the album “Preludes and Fugues Op.87” by Dmitri Shostakovich, the album with accordion works by Jozef Podprocký and l ‘ latest work from 2012 soloist with works of famous composers in the field of accordion music.

Today Peter Katina invites you to the 42th edition of the festival of contemporary music, from 8 to 16 November. It will be a festival made up of 12 different events that will fill a nine-day festival with contemporary art: concerts, master classes, conferences music … The Contemporary Art Festival is organized by Creative center of Ostrava, which represents and promotes the works of contemporary artists, in every art, including activities for children.