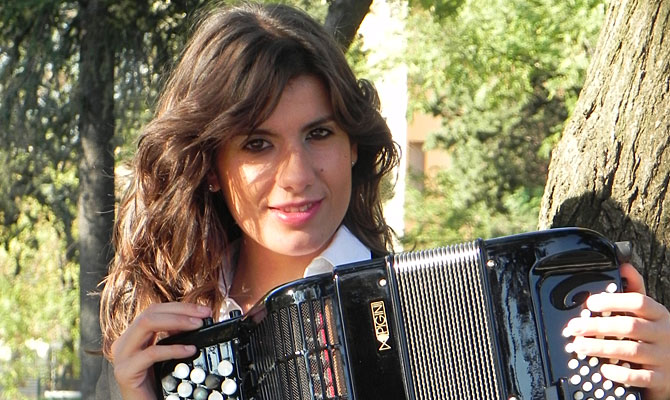 “The Chaconne is a dance, a dance of Central America who arrived in Europe through the ships of the Spanish colonizers and Spain then rampant in all European cities. When Bach meets her is the 1720, he is a man of 35 years who is writing his matches and sonatas for solo violin and the chaconne is the final movement of his second game for solo violin, the match in D Minor.
What Bach could not even imagine what it would become his Chaconne. Today’s been nearly 300 years and still amazes us. It affects his ability to turn a small reason, the bass is why, in a series of phantasmagoric and endless variations, powerful as a great architectural building like a cathedral and together they have a sweetness, a tenderness, as if to whisper times.
Saria Convertino chose his instrument, the bayan, and is a tool that in himself can have all those colors, all those degrees, all those variations from piano to forte, to fortissimo that Bach envisioned and wrote for his violin. But there are two other reasons for strong fascination nell’intepretazione Saria Convertino. On the one hand the popularity of the instrument like the accordion or in this case the bayan riportasse Chaconne in one dimension, but do not tell folk popular and, therefore, possible at all. A contemplation and a Bach dialogue with the divinity but through Bayan made immediately and an almost folk simplicity.
The second reason is the physical charm of this instrument.
There are times when the interpreter and the instrument, or Saria and Bayan are no longer distinguishable. They are one. The device adheres to the body of Saria, and Saria body seems to want to incorporate within themselves, embrace the instrument. It is something that remembers how music has also a physical aspect, a physical intensity that then mysteriously translates into emotional intensity.
Saria Convertino has chosen as the set for this video dedicated to the Chaconne in D minor Bach partita a church in Rome, the “church of Our Lady of Soul” which is a church tied to German culture so indirectly with a tribute to the place of origin of Bach’s Chaconne.
He created a series of changes to enhance the versatility of the instrument and returns the absolute modernity and contemporary of the chaconne and also, perhaps, creating a desire to Bach secret. Its simple directness. ”